I’ve always advocated that one needs to learn how to be smart with their insurance, and use it as a tool to protect against their biggest financial risks while ensuring that they do not overpay for their premiums.

This article was first published on SG Budget Babe.

Out of the various financial risks, the biggest in Singapore would probably be that of healthcare - hospitalisation bills, and outpatient treatments...especially for critical illnesses. These often cost an arm and a leg, and if one didn't prepare insurance to protect against this, it can potentially send them down the path of never-ending debt and emotional turmoil.

It's stressful enough trying to recover and care for an ill patient. It's even worse having to worry about how to pay the bills.

Which is why I believe a combination of integrated shield plans (hospitalisation insurance) and critical illness cover is important. I've written about the importance of ISPs here previously:

I didn't have any critical illness policies previously, but got my first one after I got married and became pregnant. With more than 5 dependents to take care of (between my husband and I), it became crucial that we had to outsource these big financial risks to an external third-party i.e. an insurer. With CI cover, one receives financial assistance to tide over periods where they cannot work or has large medical expenses not due to hospitalisation. This can be immensely helpful to not just the patient, but also their family.

And then I started getting emails from readers asking for help and advice. Many felt helpless because they had read my articles talking about the importance of insurance, but were denied insurance coverage due to their pre-existing health conditions. Several others were worried about their parents, who had diabetes.

I can relate, because my own father is a diabetic.

And one of the biggest protection gaps in Singapore right now?

Critical illness coverage does not extend to diabetes.

You can read more about it on LIA's guide to critical illness coverage in Singapore here. You won't find diabetes in the list of critical illnesses covered by most traditional plans, nor in yours.

That's a big problem, considering how diabetes is currently the second-leading cause of ill health in Singapore, and how it leads to many other conditions including heart attacks, strokes, kidney failure, and more. MOH has even pointed out that 3 in 4 Singaporeans above the age of 65 have diabetes, high cholesterol, or hypertension, or a combination of the three. The situation is so serious that our government has officially declared a war on diabetes.

Based on data from the National Registry of Diseases (2014),

If that's not worrying, I don't know what is. 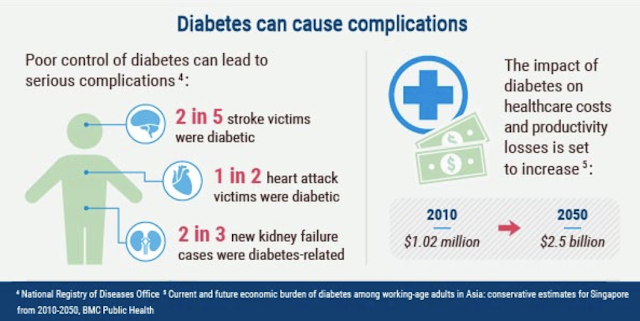 Needless to say, that's even more medical costs incurred aside from the cost of insulin itself.

In fact, it is estimated that Singaporean patients with Type 2 diabetes are expected to spend anywhere between S$70,000 to S$130,000 on their medical expenses, depending on how many years they have to live with the condition.

That's not a small sum. And the worst part? Your critical illness insurance and/or hospitalisation plan will most likely not cover it, or be barely sufficient.
You can claim MediShield Life if you are hospitalised in public hospitals due to your diabetes. But not all diabetics / complications from diabetes will require a hospital stay. In such cases, you won't be able to claim. 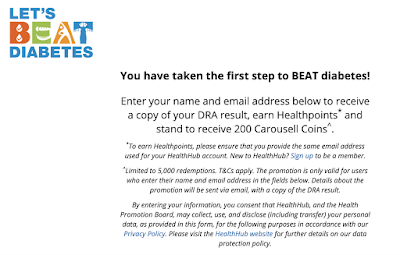 I took the test and unfortunately, found out that I'm at a higher risk of being diabetic. This might be due to the fact that I've a family history of diabetes, and that I was diagnosed as having gestational diabetes while I was pregnant with baby Nate. My risk might also be higher now because I've yet to lose the remaining 10kg of my pregnancy weight (argh!). 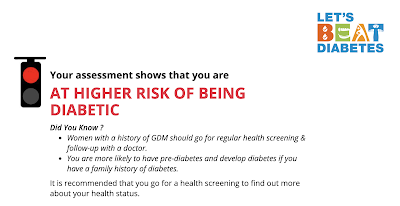 Did you know? If you're at risk based on MOH's Diabetes Risk Assessment test, you can also get a subsidised health screening for $5 or less at any polyclinic, hospital or CHAS-participating clinic. 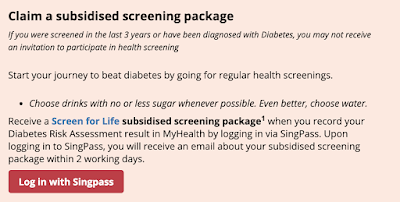 I logged my results into MyHealth and was shown this: 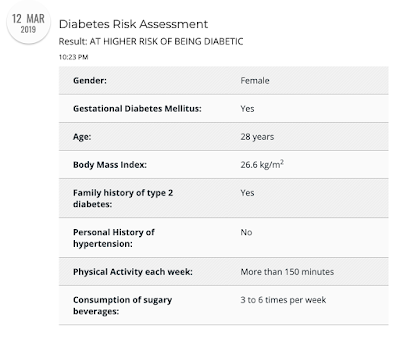 It is time we start doing something, and here's what we can do:

If you're a pre-diabetic / diabetic, you may not be able to get insurance. Thankfully, with more Singaporeans being diagnosed with the condition, 3 insurers have now extended coverage, including the latest Aviva MyCoreCI Plan.

Do speak with a financial advisor to understand the merits of each plan, before you decide which one gives you the best coverage with affordable premiums for your case.

Till then, let's BEAT diabetes!

Disclosure: This post was brought to you in collaboration with Aviva Singapore. All opinions are that of my own.

Take charge of your life today to prevent diabetes and you could save yourself on the hefty medical bills associated with the condition years down the road. But if you're having trouble getting insurance coverage because you're among those who already have pre-diabetes, diabetes, or high blood pressure high cholesterol / high body mass index, our newest product, Aviva's MyCoreCI Plan, might just be the answer for you. leave down your details in the form below and we'll be in touch.

Now you can get covered even for existing health conditions*

Leave us your details to find out more about Aviva's MyCoreCI Plan which covers Type 2 Diabetes, Pre-diabetes or the 3 Highs (high blood pressure, high cholesterol and high Body Mass Index)

Sorry, there seems to be a problem with this page. Please refresh and try again in a few minutes.

Thank you for your submission.

One less thing to worry about

Subscribe to us for regular news updates, insights and tips on insurance, offers on products and services that’ll give you greater financial confidence.

Sorry, there seems to be a problem with this page. Please refresh and try again in a few minutes.

Thank you for your submission.

By clicking “Submit”, you consent to Aviva and Aviva related companies contacting you to provide you with information concerning Aviva and Aviva related companies’ products and services and special offers which may be of interest to you. For details of Aviva’s Data Protection Policy, please refer to https://www.aviva.com.sg/en/pdpa/. To withdraw your consent at any time, please call Aviva at +65 6827 7988.

Post-run aches and pains: When does it cross the line to injury?

When to worry about those pesky mouth ulcers

Lost your voice? Here’s what your body is saying

Protection needs for pre-retirees or retirees

Protection needs for newly married couples or couples with children

Protection needs for people with aged parents to support

A survivor shares: “How cancer in my teens helped me get more out of life”

How to manage the cost of diabetes

Money Banter (the "Portal") is for general information only and does not take into account the specific investment objectives, financial situation, health condition and needs of any particular person. The contents of this Portal are intended merely for educational purposes and should not be construed as the giving of advice or the making of a recommendation. Nothing contained in this Portal shall constitute a distribution, an offer to sell or the solicitation of an offer to buy. We recommend that you discuss any specific matters with your financial adviser representative or legal adviser before making any decision. You are responsible for your own medical care, treatment and oversight, and any health-related content on this Portal, including, text, treatments, dosages, outcomes, charts, profiles, graphics, images, messages and forum postings are strictly information to promote general understanding of certain health topics only, do not constitute the providing of medical advice, and should not be relied upon as a substitute for professional medical advice, diagnosis or treatment. Always seek advice from a physician or other qualified health care provider regarding your medical condition or treatment and before undertaking a new health care regimen. This Portal may include information sourced from third parties and links to third party websites. We are not responsible for the accuracy or completeness of, and do not recommend or endorse such information or third party websites nor recommend or endorse any specific tests, physicians, products, procedures, opinions or other information. While we have taken reasonable care to ensure that the information on this Portal has been obtained from reliable sources and is correct at time of publishing, information may become outdated and opinions may change. Except to the extent prohibited by any law, we are not liable for any loss (including direct, indirect and consequential loss, loss of profits, loss or corruption of data or economic loss of any kind) that may result from the access or use of or reliance on the information on this Portal.  | Terms of Use | Privacy Policy

Protected up to specified limits by SDIC. This advertisement has not been reviewed by the Monetary Authority of Singapore.